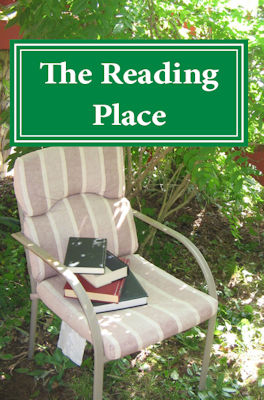 We should all have onea special place where we get away from the world. A place where distractions are kept to a minimum, worries and cares are forgotten, and an endless cornucopia of imagination is ours for the taking. A place where we can open a book, open our minds, and be transported elsewhere. A reading place! ISBN: 978-0-9851833-2-5

*CHELLE WOTOWIEC        WHEN WE BECOME THE PHOTOGRAPHS

She no longer waits tables, but has not been able to entirely shed that monthly nightmare where more and more people join the booth and demand drinks and, as it turns out, she does not have her pen in hand.

Originally from Ohio, she is currently going where ever the flow takes her. The flow of what, she is not sure.

She misses her mother, father, sister, grandparents, Ripley, and her good friend Nate. Homesick has taken on a new definition now that 2000 miles of earth separate her from them all.

If there is a meaning to life, she is pretty sure that cats are part of the equation. She also thinks that if you have not loved a cat, you have never really known a cat.

She believes there is no greater power than the power of language.

Words will change the world.


A former journalist turned copywriter, Drew Hardman is a marketing communications specialist and freelance writer based in Pittsburgh, Pa. With published works ranging from news and sports features to substantive legal articles, case studies, and short fiction, his portfolio includes interviews with Grammy-nominated artists, documentary film makers, and subject matter experts representing any number of industries. He is a two-time W.Va. Press Association award winner, and his fiction has received honors on The Renegade Word and WritersType.

*MIKE TUOHY        WAR OF THE WORLD'S FAIR
Born in 1954 in northern New Jersey, Mike moved to Georgia in 1965 and resided in the general vicinity of Atlanta. As a professional geologist, Mike has worked in the construction engineering and environmental consulting rackets since 1980. Mike wrote fiction badly for many years but with the help of an excellent editor and interesting collaborations has had recent success with 10 published short stories and numerous awards for short fiction and novellas. As a two-time finalist in The New Yorker Cartoon Caption Contest, he boasts a current total of nine words in that prestigious magazine. Mike has been married to the same Southern gal, Sally, since 1975. Together they raised two boys to adulthood and pursue a peaceful existence in an earth-sheltered home on the North Oconee River near Athens, Georgia.

Vincent Guiliano was born in raised in New Jersey and has a BA in Psychology and Creative Writing from Rutgers University; he is currently in Graduate Studies at California State University, San Bernardino and is in the process of writing an autobiographical novel. Vincent lives with his wife in Riverside, California.


Catharine Leggett lives in London, Ontario, Canada. Her short stories have appeared in a number of print and online journals, including, Room, Event, The Antigonish Review,The New Quarterly, Canadian Author, paperbytes, as well as on CBC Radio. Her novel, "The Way To Go Home", was a finalist in the Columbus Creative Cooperative Great Novel Contest for 2013. A short story, a finalist for the Eric Hoffer Short Fiction Award, appears in Best New Writing 2014. A short story is forthcoming in the Main Street Rag Law and Disorder anthology.


TJ Perkins is a gifted and well-respected author in the mystery/suspense and fantasy genre. Her short stories for young readers have appeared in the Ohio State 6th Grade Proficiency Test Preparation Book, Kids Highway Magazine, and WebzineNew Works Review, just to name a few. Shes placed five times in the CNW/FFWA chapter book competition. Her short story of light horror for tweens, The Midnight Watch, was published Oct 2007 by Demon Minds Magazine. Her self-publishing achievements have been greatly recognized and also TJ has conducted writing workshops for Balticon.


I am a lifelong learner and teacher, a mother and daughter, and an avid reader and fan of theatre. Whether teaching writing at the University of Pittsburgh or sitting with my 97-year-old father in the park, I try to find meaning and beauty in the world around meand in those who inhabit it.

I thank all the organizations and individuals who have honored me as a writer. These include Scribes Valley Publishing for recognizing all five (and counting) of my Vera stories; Dream Quest One for awarding me first place for my essay, Lovingly Ever After; First Line Anthology for including my book review and story in its magazine; and the editors of the Pittsburgh Post-Gazette for consistently choosing my memoirs and essays for Page Two or the Op-Ed Page.


Kristin Swenson is the author of Bible Babel: Making Sense of the Most Talked About Book of All Time (Harper Perennial, 2011, and now available in both Portugese and Korean) as well as two other books and provided creative translations with commentary for The Voice Bible. In addition to academic articles and news outlets, Kristin has written for The Christian Century, Beliefnet., CNN.com, The Washington Post's On Faith, Good Morning America's online religion page. She regularly contributes to The Huffington Post and Publishers Weekly. With a Ph.D. in the history and literature of ancient Israel, Kristin earned tenure in Religious Studies at Virginia Commonwealth University in Richmond, VA. Following a fellowship at the Virginia Foundation for the Humanities, she resigned from VCU and moved to Charlottesville, where she is affiliated with the University of Virginia. In addition to speaking engagements, her work includes historical fiction and playwriting as well as nonfiction. You can find her at www.kristinswenson.com.


Amelia Perry was born and raised in rural Vermont. She has been writing short stories and prose since she was a child, but has only now taken the step to get them in print. Her favorite stories are those she has written for young adults or middle grade readers. She has written in many genres, but somehow they all end up taking a dark twist, and that princess story is suddenly fraught with demons, nightmares, and bumps in the night.

Her short story Watcher, like many of her creations, is based on a real experience that happened to her when she was about eight. The slide, the hill, and the field are all part of her family home; as was the terror she felt when she was sure something was watching her.

She gets the rest of her inspiration from her two adventurous kids, her husbands penchant for chaos, and her two crazy German Shepherd Dogs, Sampson and Shrimp Scampi.


I.O. Kirkwood, wordsmith~storyteller~alternate historian~metal junkie, resides near Charm City, USA. In between bouts of banging her head, blogging, and twittering, she's also the author of Subatomic Revolt, volume 2 in Mike Lynch's No Revolution Is Too Big series. You can find I.O. on her blog at iokirkwood.wordpress.com, on facebook.com/pages/Io-Kirkwood/147076365432316?ref=hl, and on Twitter @iokirkwood.\m/

SUSAN ZIMMERMAN: Born in rural New Jersey in 1967, Susan enjoyed a pleasant childhood around the Adirondacks of Upstate New York. Married to Mr. Wrong at 21 until getting knocked around lost its charm, she started a new life as a single mom of a baby boy in NYC in 1993. Found work refurbishing the Verrazano Narrows Bridge while pursuing an overlong relationship that turned out to be empty promises. Susan and son headed to Georgia in 1997 and finally got it right. Susan acquired an education that prepared her for a career in the environmental sciences, engineering and commercial construction. Having learned how to deal with men the hard way, Susan now shares her experiences through writing, She currently enjoys life with her husband Charlie (Mr.Right) in the Appalachian foothills of Georgia.

MIKE TUOHY: Born in 1954 in northern New Jersey, Mike moved to Georgia in 1965 and resided in the general vicinity of Atlanta. As a professional geologist, Mike has worked in the construction engineering and environmental consulting rackets since 1980. Mike wrote fiction badly for many years but with the help of an excellent editor and interesting collaborations has had recent success with 10 published short stories and numerous awards for short fiction and novellas. As a two-time finalist in The New Yorker Cartoon Caption Contest, he boasts a current total of nine words in that prestigious magazine. Mike has been married to the same Southern gal, Sally, since 1975. Together they raised two boys to adulthood and pursue a peaceful existence in an earth-sheltered home on the North Oconee River near Athens, Georgia.