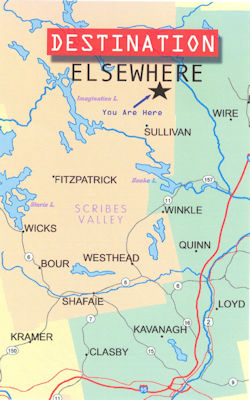 Greetings, and thank you for coming along on our journey of a lifetime to the uncharted locality of Elsewhere. Well be leaving soon, so please take a seat and relax. We dont stand on formalities here, so kick off your shoes and make yourself comfortable. The actual travel time to Elsewhere is briefits just an imagination awayand our ride will be extremely smooth and easy.

*BILL WESTHEAD         ADVENTURE IN THE CAUCASUS


This is Bill Westheads third time as a finalist in the Scribes Valley Short Fiction Contest. His previous stories Romeo and Sierras Last Mission and Cruel Justice were finalists in 2005 and 2006 and published in the anthologies of those years - They Do Exist! and Mind Trips Unlimited.

Born in England he and his family emigrated to Waycross, Georgia in 1973. With their children having fled the nest to start their own families he and his wife continue to live in Waycross with their dog, Ben. and cat, Oscar.

A member of Southeastern Writers Association and Coastal Writers Group he has published four historical novels Once in Old Frederica Town, Confederate Gold, Clogs and its sequel The Mill. His work has also been published in Cricket, Animal Tales, Chicken Soupseries, the O, Georgia! anthology, Crafts n Things and several trade magazines. Apart from novels and short stories he also writes a monthly theatre column, Footlights, for area and local newspapers.

Currently he is working on his fifth book Not My War, a memoir of his time as a child in England during World War II.

When not writing he divides his time between his Bonsai collection and the Waycross Area Community Theatre.

He can be contacted at westhead@accessatc.net


My name is Charles Kramer, though to most folks Im Chuck. I am an Episcopal priest and serve as rector at St. James Church in Hyde Park, New York, the one-time spiritual home of Franklin and Eleanor Roosevelt.

Like most people who claim to be writers, Ive been doing this all my life. I wrote for the school paper in high school, used my study hall to come up with morbid stories with my friend Scott and dreamed about growing up to become Erma Bombeck.

My Freshman year in college was spent at Ripon College where I wrote for the school paper and had my own humor column called A Sort of Genius. James Thurber fans will recognize that as the title of a Thurber short story. When I transferred to Indiana University in my Junior year, I majored in Journalism and German literature.

After earning my Masters in German, I went to seminary to become a priest. Thats what Ive been doing ever since. Ive served in Peekskill, NY, Morganton, NC, and now in Hyde Park where Ive lived with my family for the past 10 years. For five of those years I wrote another column (called Town and Church) for the local paper. I gave it up to write a novel (as yet unpublished), but still write a blog called Web and Church.

Writing short stories are my form of relaxation. Often, I write them for and with my children. Some serve as springboards for sermons or columns. I enjoy playing my tuba and recorder and also have fun coaching youth soccer and attempting to play ice hockey.


Joni Bour is a native Oregonian and works in elementary school special education. Describing herself, she says, she is a searcher, believer, and rebel. She says above all things, she is a believer in what others might consider lost causes, and knows that tenacity is faith. Every day she sees things that other people would not have thought possible, that happened because someone believed it could should and would.

Joni has held a fascination with the veterans of the Vietnam War all of her life. She says she has no idea why, but even as a child growing up in the 60's and 70's she would take every opportunity to study them, not so much the war, but the men and women who served there, who they were, why they were, and what they had become after the war. She spends much of her free time working on veteran related projects, such as working at traveling memorials, volunteering for the Veterans History Project for the Library of Congress, writing book reviews for books written about the Vietnam War and has been sought out by veteran authors to write forewords and afterwords for their books.


I was born in Tehran, Iran. The revolution caused my family to move to London, England and then to the United States. I have a B.A in English Literature from George Washington University and am currently working on my first manuscript entitled Blood of Persia, a historical fiction about Cyrus the Great, founder of the Persian Empire.


I've been writing since age 11, when my girlfriend and I cut our fingers and mingled blood, vowing to become writers. She became a social worker and I became a nurse.

I took up writing again after I had two children. My poetry has been published in Blue Satellite, Beyond Baroque Anthology, American Journal of Nursing, The Rag, Four Poets, New Venice Poets, Convergence, Mad Poets, 2000, HayWire Anthology, and 42 Grandmothers. I taught "Letting Poetry Happen" for the Young Writers here in the Rogue Valley. I won the Bultman Award for a one-act play in 1980 and it was produced by Loyola University, New Orleans. Most of my plays have been produced in Ashland, OR.I ran two theatres here in the 1980's and now work for Ashland Community Theatre.

I've also won two awards on one screenplay. I run HayWire Writers' Workshop, and we've put out an anthology of our work. 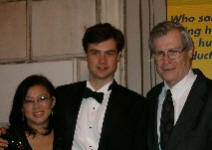 
Dan Sullivan (on the right in the picture) teaches English literature and composition at St. Mary's Ryken High School in Leonardtown, Maryland. Dan has had three short stories published to date; the last placed second in the 2006 Scribes Valley Fiction contest, but he is most proud of his family--his wife Jamie, his daughter Laura, his son Mark, his two granddaughters Kyleigh and Erika, and his step-daughter Ploy who lives in Bangkok. Pictured with wife Jamie and son Mark (nominated for a Helen Hayes Award in Washington DC. in 2006 for his starring role in After Ashley).


Philip Loyd resides in Houston Texas and is the author of 37 short stories. His work including essays, poetry, and book reviews has appeared in 83 publications in 7 countries with one story even produced for radio in Australia. Included in his numerous awards is the Hemingway Center Short Story Prize. 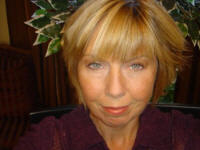 Vickie Clasby resides in Franklin, Tennessee with her husband, twelve-year-old daughter, ten-year-old twin sons, two cats and a crazed Husky mix dog. She works as a business analyst for a major healthcare company. Her life is filled with corporate drama, domestic chaos, and endless writing material.

Vickie has written several short stories, essays, and a mystery novel, and is currently working on a sequel.

The Most Glorious Day" is her first published work.


Jean Tschohl Quinn started out as a Wisconsinite, played at being a Virginian after college, pretended to be an Illinoisan for a while, is begrudgingly becoming a Californian but prefers to be considered a world citizen.

A mathematician by degree, a musician by choice, a mom by  well, we all know the usual way one gets to be a mom  stories started attacking from out of the blue in November of '06. She can't make them stop, so she thought she'd try sharing them. She lives with her husband, three teen-aged daughters, two dogs and several hundred redwood trees.


I live in Nowra, New South Wales, Australia. I am a high school History and English teacher, and have been teaching for 10 years. I came to teaching late in my life, starting university when I was 44 years old. I have two children; my son Che is 32 and my daughter Kym is 29. I have four beautiful grand daughters; Shannon (9), Lorien (7), Ella (2 1/2), and Erin (6 months). Writing short stories is a new adventure for me as I have only been writing for about three years. I enjoy reading, tapestry, and online chat.


DS Winkle has lived in Chicago most of her life. She works in Human Resources for a large financial institution and has just recently begun to write short stories. She and her husband love traveling, hiking and baseball. DS believes interactions between people are what make life interesting, and the key to happiness is not to take oneself too seriously. "Remorse" is her first published work, and she hopes to dedicate more time for writing in the future.


Kathleen Fitzpatrick works in communications and fundraising in Illinois. Heaven on Earth is her first work to be published. She has a wonderful, loving family who she tries to spend as much time with as possible. Kathleen is especially grateful to her husband, Casey, who has given her the gift of time to discover her writing talents.


****J. R.'s story will not be part of the anthology as it has been accepted for publication elsewhere.****


Frank Kavanagh has taught English and/or speech in central Texas for 23 years, including the past seven at Seguin HS. He began his writing career as a part-time sportswriter at the Port Arthur News one week after high school graduation, but a grade of 13 (yes, out of a 100) on his first college calculus test meant he would not continue the family engineering tradition. He has degrees from Lamar University and the University of Texas, a wife, a teenage son, and two twenty-something daughters.